whatever the official line be, not all Australians are blind to the fact that the reality for Indians is that elements of fascism are thriving within BJP’s version of democracy. Awareness is growing within Australia, led by nongovernment members of parliament and members of civil society. Following the Delhi pogrom some Australian Indians circulated a petition that calls on India’s High Commissioner to Australia to stand against communal violence. Community organisations are working with MPs to hold roundtable discussions on human rights abuses in India in Australian parliaments.

The latest round table on “Is India Becoming a Fascist State?”, held in New South Wales parliament was organised by a broad international coalition comprising the Australia-based The Humanism Project, the Indian American Muslim Council, Hindus for Human Rights, and Amnesty International Australia. The forum, hosted by Australian state and federal MPs, attracted speakers and parliamentarians from the US, Britain, and India.

State and federal MPs from the Greens party have spoken in their parliaments about the crimes of the Modi government, including the takeover of Kashmir and ending its special status. Also motions have been tabled for debate in these parliaments, that urge the Australian government to call on the Indian government to revoke the citizenship laws and to treat all of its citizens equally.

The dangers principled Australians are seeing are numerous. Since Modi’s 2019 election win the BJP have stepped up their pursuit of a Hindu nationalist agenda. During this time there has been an increase in anti-Muslim attacks. Most Indian Muslims face great hardship. The Modi regime has sought to restrict Muslims’ rights, particularly through recent changes to citizenship laws.

The fair and just foundation that India’s judiciary, parliamentary, and education systems were built on is being extensively eroded. The development of a fascist-like infrastructure – in terms of passing discriminatory laws, neutralising judges and cultivating a BJP-controlled police force – is at an advanced stage in India. Legislation similar to the 1930s discriminatory Nuremberg laws on issues of citizenship and marriage have been passed by state and federal parliaments where the BJP dominates.

The Modi regime is also under fire for exacerbating the oppression and discrimination of Dalits, Adivasi and other marginalised groups. Many forest dwellers are losing their homes and livelihoods in a series of land grabs by mining and forestry companies that have given funds to the BJP are backers of the Modi regime. BJP forces are also embroiled in state-based conflicts, particularly in Kashmir. 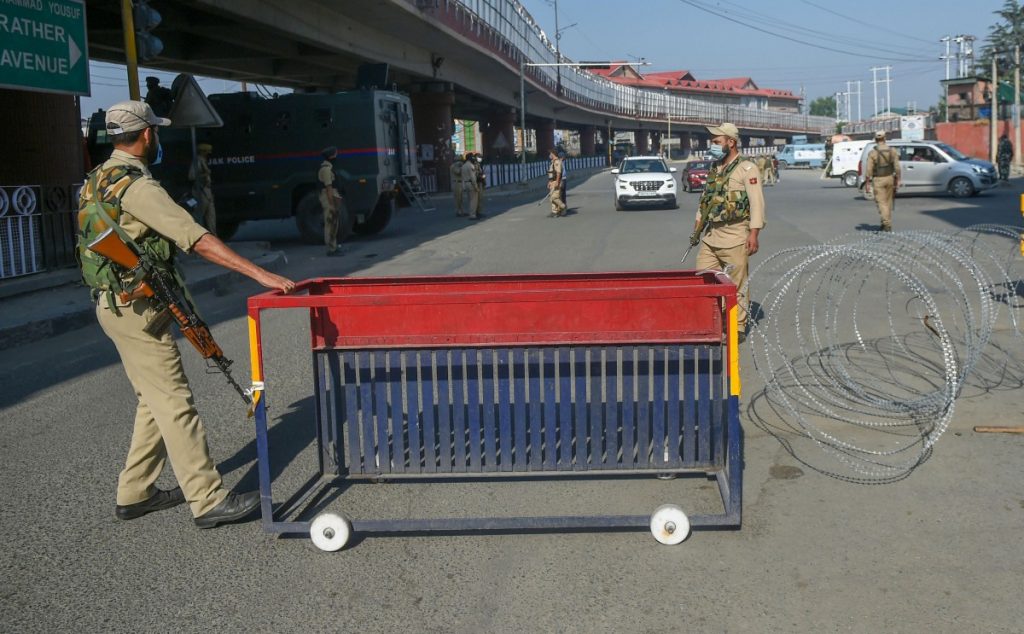 Security personnel place a barricade on a street during the restrictions imposed on the first anniversary of revocation of the special status of Jammu and Kashmir, in Srinagar, Wednesday, Aug 5, 2020. Photo: PTI,

People are rising up in protest

These kinds of tendencies in Indian politics look set to worsen as the BJP has such a solid hold on power. The party’s strategists know all the tricks of modern electioneering and have a particular penchant for fake news to discredit opponents. The BJP is now the richest political party in India by a massive margin and have the resources to pull off huge wins.

Although it is important that India moves towards a fair electoral system, with limits on political donations and election expenditure,  electoral politics is not the solution to stopping the crimes against humanity and human rights abuses that are occurring in many parts of India on a daily basis.

The good news is that people’s movements are on the rise, including the world’s largest strike of 250 million workers and farmers, supported by their allies from civil society including numerous student and women’s groups. These pose a huge challenge for the BJP.

For now, the Australian government is soft pedalling on issues in India, but attempts are ongoing to change this, and none too soon. After all, global scrutiny of BJP and RSS activities will be critical to ending human rights abuses and the rise of an increasingly authoritarian government in India.

Lee Rhiannon is a former Australian Greens Senator. Over the past five decades she has worked on a range of social justice, environmental and industrial campaigns.