Vendors also prohibited from selling within 100m of schools, parks and religious places 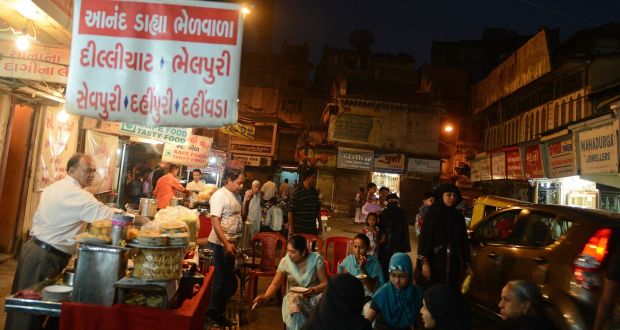 The BJP banned the street sale of all non-vegetarian fare in four major cities as it ’offended’ Hindu religious sentiments.

The Hindu nationalist party of Indian prime minister Narendra Modi has banned the street sale of all non-vegetarian fare, including eggs and fish, in four major cities in his western home state of Gujarat as it “offended” Hindu religious sentiments.

The Bharatiya Janata Party (BJP)-run municipal corporations in Gujarat’s largest city of Ahmedabad imposed the restrictions this week, following those similarly enforced in nearby Bhavnagar, Rajkot and Vadodara, which ordered the removal of non-vegetarian food carts along all major roads.

The embargo also prevents vendors from selling their merchandise within 100m of all religious places, parks and educational institutions in these cities, with local BJP councillors stating that such food had a negative impact on people’s minds, particularly children.

Vadodara’s municipal commissioner Hitendra Patel was forthright in defending his ban, claiming to have received numerous petitions from locals saying that the public sale of meat on city roads hurt their inherent Hindu traditions.

India’s majority Hindu community is typecast as vegetarian, which traditionally is considered “sattvic”, or one that purifies the mind and body.

Most state-run establishments, including schools and universities, never serve food that is non-vegetarian – a peculiar native Indian-English classification that typifies all those who eat meat, chicken, fish or eggs, or all four.

Eggs, for instance, are not part of the free midday meal programme for poor students in government-funded schools.

Since the BJP assumed federal power in 2014, it has made India’s food habits an integral part of its politics, by imposing complex bans on individual beef consumption and outlawing cow slaughter, as the animals were considered holy by India’s majority Hindu community.

Thereafter, the BJP has gradually extended this beef ban to include all other non-vegetarian fare, and over the past seven years has often proscribed its consumption during Hindu religious festivals in several states ruled by them.

In August, the BJP government in Uttar Pradesh state north of Delhi completely banned the sale of meat in the temple town of Mathura, which lies some 180km from the federal capital, with a population of more than 2.6 million. Chief minister Yogi Adityanath said the restriction was being imposed at the behest of local Hindu priests.

Other analysts said the veto on the food carts was a calculated BJP move to harass Muslims, who largely control India’s meat trade.